Apple’s FAQ on the FBI Request

Transparency is key in this fight.

This page is riddled with corporate-speak and has a bit of hyperbole, but it does try to lay out Apple’s case in the San Bernardino phone unlocking case.

Some hightlights that stand out to me:

Second, the order would set a legal precedent that would expand the powers of the government and we simply don’t know where that would lead us.

The digital world is very different from the physical world. In the physical world you can destroy something and it’s gone. But in the digital world, the technique, once created, could be used over and over again, on any number of devices.
Law enforcement agents around the country have already said they have hundreds of iPhones they want Apple to unlock if the FBI wins this case.

and most importantly, emphasis mine:

We feel the best way forward would be for the government to withdraw its demands under the All Writs Act and, as some in Congress have proposed, form a commission or other panel of experts on intelligence, technology, and civil liberties to discuss the implications for law enforcement, national security, privacy, and personal freedoms. Apple would gladly participate in such an effort.

Apple is standing up to the FBI’s effort to use a 227 year old law to unlock a smartphone in 2016. Obviously, technology has advanced a bit in the last couple centuries, so new laws need to be written. I, for one, am happy to see this fight, but it’s not without danger.

The big issues, as I see it:

This is probably the biggest tech story of the year, and it’ll be interesting to see how it plays out, and the implications of it for decades to come. 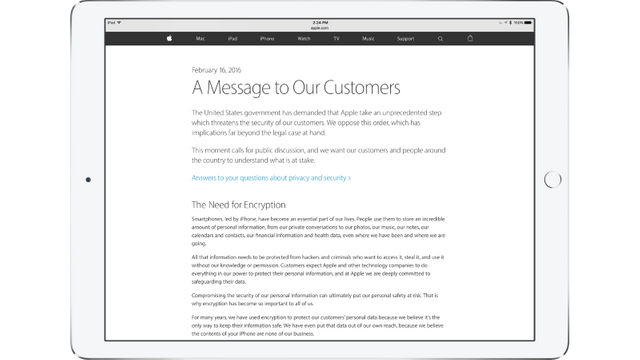